Spowtr — Life, death and rebirth | A review of The Transformers: The Movie by LorenzoPrinci
↑

Life, death and rebirth | A review of The Transformers: The Movie

Why can the 4 minutes below have so much meaning for fans of The Transformers and even move them with extreme emotions; joy, pride and sadness despite it being a children's animation? It is said that in 1986, children began to cry in movie theaters at the death of their hero Optimus Prime.

I will argue that a scene like this can carry this much emotional weight because of the transcendent relationship between the young fans and the character.

An older, more cynical view will look at the death of Optimus Prime at the beginning of the film, along with other popular characters, as nothing more than a marketing strategy to allow for a new generation in the toy line to make sales. However, I'll still argue for the case of effective storytelling. One that creates a stronger personal relationship between the characters and the fans of the show.

Unlike most general fiction which can still be very effective in connecting people with great characters. Cartoons such as The Transformers, contain characters which are not limited to lives within their fictional universes. They can transcend this life and live a parrallel life in our world as companions to the children who own them as toys. They in fact spend more time in the hands of playing children than they do in their own world.

Optimus Prime is one of the most beloved children's characters of all time and Peter Cullen's voice gives him a unique and identifiable quality. For two years prior to the release of the original animated The Transformers: The Movie, he led the Autobot's war against the Decepticons. The war was fought with a simple eb and flow; Megatron would come up with a diabolical scheme and Optimus Prime and his valiant Autobots would undoubtedly stop him. Despite this epic struggle, the balance of power was never really tipped. The safety of kid's television was never breached; though their were some close calls for dramatic effect.

What the series succeeds in doing is set up a bond between the child viewer and its characters. Like many young boys at the time of the shows popularity, Optimus Prime was my hero. He was larger than life, always made the right decision and protected us humans from the evil Decepticons. The courage and heroism was spawned from the fact that the Autobots were always outgunned and out numbered. They couldn't fly like the Decepticons and transformed into cars and trucks, whereas the Decipticons transformed into War Machines (Megatron himself a gun). Despite these limitations, they remained stoic.

The reality was that they were probably better off joining the Decepticons but the conscience built into their programming meant they knew that the Decepticon contempt for human life was wrong, despite being an inferior life form. And The Transformers were a life form. More than the machines that met the eye...

In 1986, The Transformers left the land of television and moved into feature film territory - a much more dangerous place. Movie world has different rules and physics, the landscape is more dangerous and stakes are higher. Extremely rare in children's storytelling at the time, especially in Hollywood, the creators made a decision to not simply make the equivalent of a long episode but really elevate their writing for film. 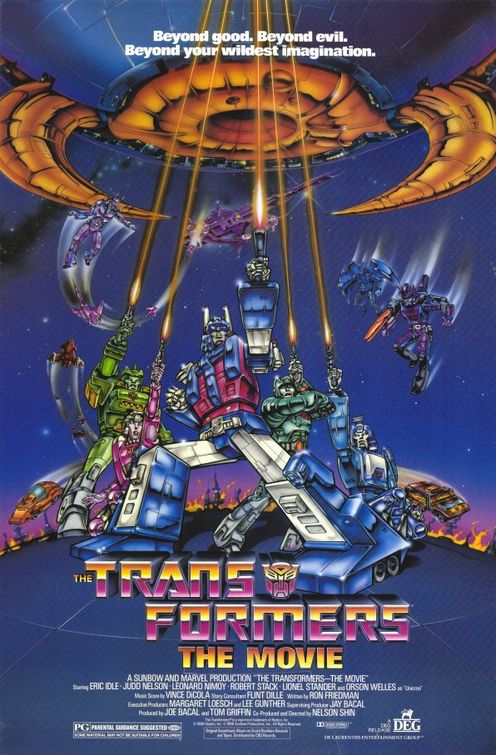 In the opening scene of the movie, a peaceful planet is completely destroyed and absorbed by Unicron; a giant menacing machine planet. The serious and dark tone is set for the film, even before the title sequence. Though we don't know any of the robots killed or anything about their planet it is obvious that they were peaceful due to certain shots, such as that of children playing.

The following scenes focus on more familiar themes, with the Decepticons planing an attack on Autobot City. Their plan begins when they board and take over an Autobot ship killing everyone on board. We see Megatron and Starscream murdering beloved Autobots such as Brawn and Ironhide.

By commandeering the ship, the Decepticons are able to avoid early detection and make it all the way to Autobot City where an epic battle ensues. The Autobots are able to get a message out to Optimus Prime, who quickly makes his way back to Earth. Just when things appear to be at their worst and the Decepticons have breached the walls, Optimus Prime arrives declaring,

"Megatron must be stopped, no matter the cost."

Optimus Prime rightly predicts that killing Megatron will cause unrest within the ultimately ill-disciplined Decepticon ranks. Therefore Optimus shows us his true leadership ability and endless courage along with wisdom. Knowing he probably won't survive, he doesn't hesitate to take on a gauntlet of Decepticons and then face Megatron for one last time.

In this scene, fans of The Transformers finally get to see how strong Optimus Prime is as a very entertaining action sequence plays out (as seen above). With Stan Bush's The Touch blasting in the background, Optimus kicks some serious Decepticon butt.

After dealing with his minions, Optimus challenges Megatron one final time,

"One shall stand, one shall fall".

Ultimately this fight is the death of both characters, however Prime was able to "turn the tide" as Kup proclaims, and the Decepticons retreat.

Optimus Prime's death overshadows everything and sets up the whole adventure to come as the Autobots are split up as they make way to save Cybertron from Unicron. In order to do so, a new Prime must emerge to use the Matrix and "light our darkest hour".

Megatron doesn't exactly die, but he is so heavily damaged that Starscream throws him off Astrotrain when the request comes to "jettison some weight or we'll never make it to Cybetron".

While floating in space with some other—all but destroyed—decepticons, Megatron crosses paths with Unicron, who offers him a new body. Though it seems Megatron is returning the stronger, he is essentially dead. Selling his soul to the devil, he is reborn as Galvatron, though very powerful, is none other than a pawn of Unicron and unlike Megatron, who answered to no one.

The protagonist of the movie is the young Autobot, Hot Rod and in true buddy movie style he is guided by the "old-timer" Cub. The scenes which involve these two characters are fun, as the two argue their way through prison escapes and perform various death defying stunts. One of two 'put humpty back together' scenes involves these two when Cub is torn to pieces and Hot Rod re-assembles him.

Hot Rod's journey is one of redemption, as he feels responsible for Optimus Prime's death when he interference with the battle between Optimus and Megatron. His redemption comes when he defeats both Galvatron and Unicron by opening the Matrix (though it was given to Ultra Magnus initially) and returns peace to Cybertron. When the Matrix begins to open, we hear Optimus Primes voice declare "Rise, Rodimus Prime". Here, we see the rebirth and transcendence of our principle character.

This type of character development and investment can only happen in a long term story, as an isolated movie, none of this would have worked so well. More so however, we find that the animated movie stays true to the cartoon ideals in as much as the viewpoint of the story is that of the robots and not the humans. The humans are important, in so far as they are worth protecting, even if all do not agree "such heroic nonsense" declares Megatron when killing Ironhide. The Michael Bay live action movie versions of The Transformers don't work precisely because they change the essence of The Transformers' story, making the robots secondary to the plot. By telling the story from the view point of the irritating portrayal of Sam Witwicky by Shia LaBeouf, Michael Bay basically makes the robots hollow and blurry special effects.

This long standing character development, makes the original animated movie work. It doesn't restart or reboot the story. The characters are the same as the ones in the show. Old favourites dying and new characters being developed makes the stakes of the movie high enough that the somewhat cliche ending works.

In the moment of final desperation "our darkest hour", Rodimus, born from the Matrix finally tells Galvatron that enough is enough. "This if the end of the road Galvatron", he declares, before overpowering and throwing him out of Unicron into space.

Ultra Magnus had initially tried to open the Matrix to defend the Autobots on the planet Junk. Optimus handed the Matrix to Ultra Magnus just before he died, however his attempt was pre-mature and when it wouldn't open, he was torn apart by Galvatron, who takes it for himself, mistakenly thinking he could use it to control Unicron. The Junkions later rebuild Ultra Magnus in the second such scene where a character is reborn without the help of a higher power.

The rebirth and death theme is linked to the ambition of the characters themselves. Megatron becomes a weakened version of himself, Galvatron due to his ambition. Starscream is destroyed due to his ambition to lead the Decepticons. Unlike, the Autobots however, who have power thrust on them are always reborn as greater versions of themselves. Ultra Magnus claims "I am not worthy" when given the Matrix of leadership, and is rebuilt by the Junkions. Hot Rod, who also does not seek power, simply tries to stop Galvatron when the Matrix begins to open as he grabs it from Galvatron's neck. Thus becoming the powerful Rodimus Prime in the process.

In conclusion, The Transformers: The Movie, though essentially a cartoon made for children's entertainment and marketing a new toy line for Hasbro is still able to deliver a powerful thematic story. This is some feat when considering that the recent live action film trilogy, with its huge budget, could not. This emotional resonance is possible because of the canon built by the existing history from the series, as well as the strong bond between the physical toys and their child owners.

Till all are one!