Going into J.J. Abram's Star Trek re-boot sequel, I already knew that the work would be praised as a great movie, where the director had once again made the dreary, cerebral and tired franchise accessible and cool! One person I know even said something along the lines of "you don't have to be a fan of the original series to enjoy it" and that is the whole problem as far as I'm concerned; it actually helps NOT to be a fan of the original series or it's spin-off shows.

A franchise like Star Trek isn't for everybody and it doesn't need to be. Trekkies are those who have enjoyed, or at least watched all the series over and over and not just people who know catch phrases like "Beam me up, Scotty." 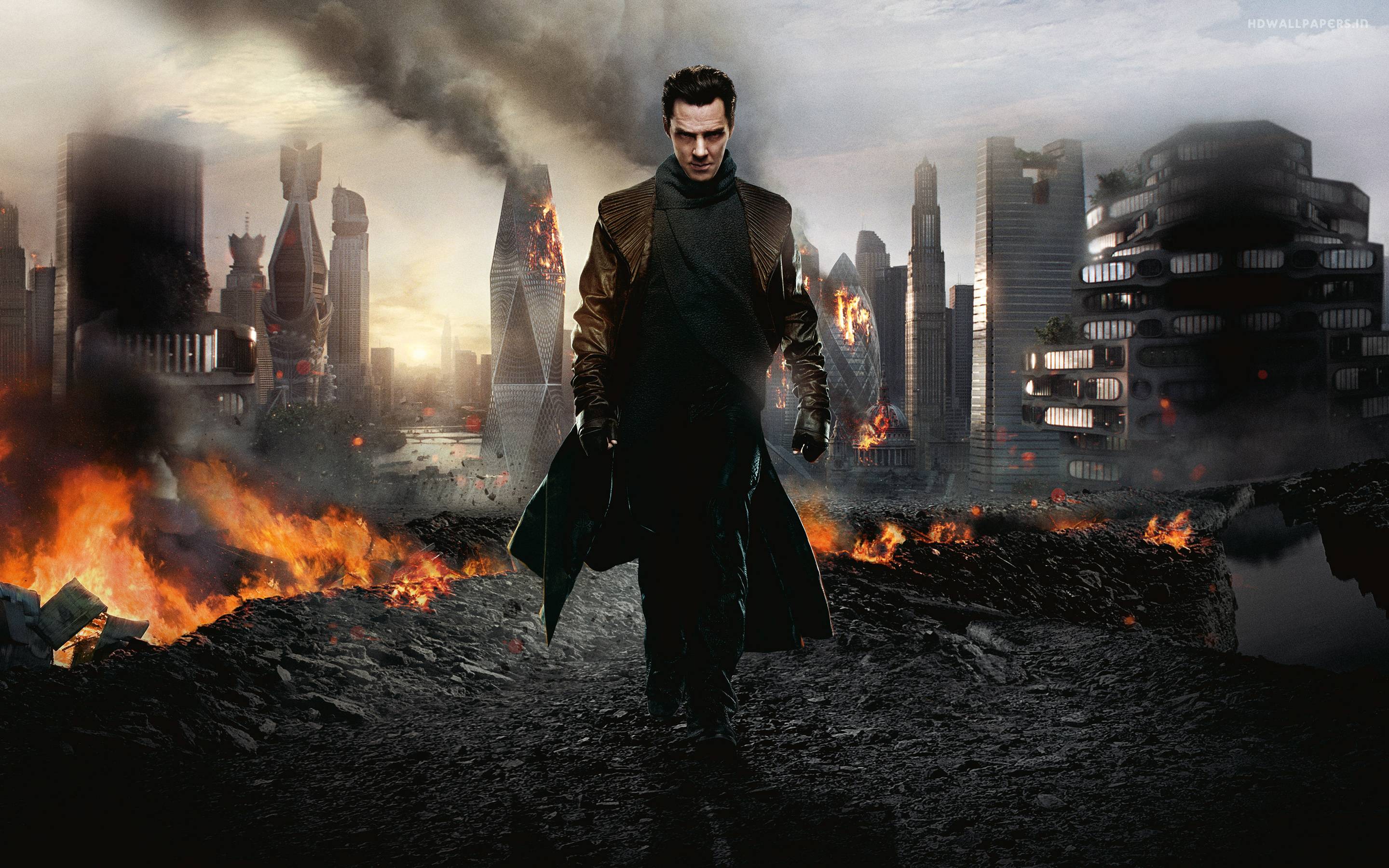 Star Trek Into Darkness plays out with the same basic writing that you'll find in any cookie cutter summer blockbuster. Spelling out who the good guys are and who the bad guys are and what is going to happen as it happens. The bad guy in this one is John Harrison, who makes an entrance eerily similar to Sybok's "I can take away your pain" sequence from Star Trek V and Admiral Marcus plays the corrupt Starfleet Admiral who's arc and fate are similar to that of Admiral Dougherty in the other worst Trek film Insurrection.

John Harrison is of course a pseudonym and he is revealed to be - spoiler alert - who everyone knew he would be, Khan. Though he resembles the character very little, physically and emotionally. Cumberbatch's powerhouse performance doesn't mask the fact that he is in essence, a redressing of Eric Bana's Nero, more than a re-imagining of Khan.

This character thinning is common in the re-boot films. Pine's Kirk is still reckless and Van Wilder-esque which for some reason people seem to think is how Shatner's Kirk behaved, but in fact is way off character. Kirk should be confident but not cocky, charming but not sleazy. These aren't characteristics that modernise the character but rather lampoon. I won't go into the rom-com squabble which Uhura and Spock get into while on the very serious mission to infiltrate the Klingon home world, Qo'noS, now spelt phonetically as 'Kronos' for some reason.

Sulu playing captain is a throw away commentary on George Takai's dream of having his own ship and the only significant thing Sulu does in the movie. Simon Pegg and Karl Urban remain perhaps the best cast as believable younger selves whereas Anton Yelchin's caricature version of Chekov yet again runs around the ship like a nervous headless chicken, adding little more than comic relief.

Spock is perhaps the best character in the re-boot franchise with a half decent arc which has carried over from the previous film, yet he still has a lot of forced "the needs of the many" type dialogue to make him sound more profound, without having to actually write anything for him we haven't heard before. The Spock Prime (Leonard Nimoy) scenes in the first film were slapped together and filled with plot holes, this time around, the cameo reeks of contract fulfillment mixed with approval seeking from an audience that it wants desperately to connect with; Trekkers.

The movie is overloaded with out of place winking to fans, more frequent and more obscure than the 2009 movie. Winks to the audience can be good, especially in a franchise as rich as Star Trek but when you are referencing obscurities like Section 31, when Starfleet Intelligence would suffice, you are no longer winking, your trying too hard. These references began pulling me out of the story as I stopped listening and starting running calculations in my head regarding continuity. This is no different to Robert Wise's excessive shots of the Enterprise in Star Trek: The Motion Picture which pause the narrative and reveal the director to the audience. A sequence so often criticized. Another odd audience nod is the use of the seat belts which reference a deleted scene from Star Trek: Nemesis. The strangest nod to the audience, was the sweeping shot of the star craft models which mirrors the much maligned title sequence from the ill-fated Enterprise in which the evolution of naval, flight and space travel is shown. That particular scene features Peter Weller who actually played a superior villain with better motives than the two-dimensional war monger Admiral Marcus but I digress...

The movie really falls apart in the third act. Regardless whether any of the above matters, as a stand alone action adventure, the movie dates itself by simply playing on in-crowd twists and mirroring The Wrath of Khan with role reversal. It's climaxes with a death that is resurrected and laughed away before you can even care and therefore undermines the theme of consequences and dilutes the no-win scenario as revenge is once more favoured by Orci and Kurtzman. These writer's simply aren't good enough at anything deeper than fast action plots which kill any and all tension by breaking it up with a joke or explosion before anything resembling drama can sink in. J.J. Abrams is great at bringing these scripts to life with state of the art visuals which his budgets can afford and this will serve him well when working on Star Wars sequels.

So top marks for action and warp speeding through a plot, unfortunately I'd like something more from Star Trek. Even when not executed well, the previous installment of films always had some concept they were exploring. Better still, the television shows, which had more time to explore strange ideas and complex themes, really showcase Star Trek in its rightful medium. Gene Roddenberry's vision of the future which evolved with Rick Berman, Michael Piller, Brannon Braga, Ronald D. Moore, Ira Steven Behr and many other great writer's really belongs on television, as a show for it's unique audience. An audience, which has been loyal and fanatical, who ultimately deserve something more than a throwaway summer action flick.

P.S. What was with those hats?