Season 3 crosses over the final moments of Season 2 and deals with the events of settlement on New Caprica and the Cylon occupation which was initiated in the preceding seasons cliff hanger. Very quickly, the whole New Caprica arc has become a two year long enduring pause to the narrative search for Earth. It is split between a year of somewhat peaceful settlement and a year of Cylon occupation. 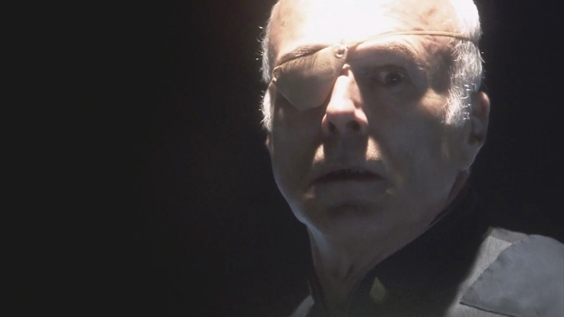 While key players resist the Cylons on the planet through extreme and questionable measures, those who remained on the fleet jumped away when the Cylons attacked. Manned by skeleton crews and haunted by guilt they must decide whether to attempt an impossible rescue or abandon hope and continue the search for Earth.

On the planet, President Balter plays the collaborating role filling little more than a ceremonial position, who's self preserving instinct offers trivial resistance to all Cylon demands. Ultimately the resistance does enough to distract the Cylons, who see their ideas for "peaceful" co-existence cannot be realised and the fleet is able to mount their rescue. With the family re-united, the aftermath of the occupation (punishment for choosing the easy path of settling) shows us quickly that things will not return to how they were. The cost was too great, the crew are now bickering over who suffered more than who during the occupation. The one thing that should have brought them together now divides them further. Colonel Tigh and Starbuck suffered perhaps the most personal abuse during the occupation and they are central to the infighting. It's not long before anyone deemed a collaborator during the occupation is sentenced to death by somewhat kangaroo justice.

Some sort of normality is restored with the now re-instated President Ruslan's pardon to the fleet and focusing their blame on Gaius Butler as the reason for all their collective pain. Gaius doesn't flee New Caprica with the fleet, but rather taken by the Cylons during the exodus. As the search for Earth finally continues, Gaius helps the Cylons, putting them on the same path as the fleet and finds himself back with the humans when both fleets reach the eye of Jupiter.

Season 3, even more than season 2, focuses less on external conflict and more on internal human drama, the Cylons main threat is their ability to get under the skin and sow seeds of bitterness and skepticism between the humans. That being said, when there is action, the production values once again better the previous year's. What is interesting and further plays on the notion of internal division is that unlike early on in the series where Gaius is the only character who deals with psychosis, there doesn't seem to be any character left at this point, who isn't haunted by dreams, hallucinations or spiritual episodes. Not even the Cylons are immune to this very human glitch.

With Gaius now back in custody, Roslin and Adama must decide his fate; a fair trial or a trip out of an airlock? Much like their decision not to rig the election (which may have been the right decision) they choose the human right and give Baltar his trial. Judged with high treason for his actions (or in-action) during the occupation, the public trial causes great tension throughout the fleet and cleverly brings out many hard truths. In the context of the show, the trial is almost a red-herring which distracts us from the background elements which build toward a final sequence of events culminating in an amazing cliffhanger. It is amazing because it doesn't just make us wonder and leave us hanging for what will happen next but also question everything that has happened in the series so far. The entire fabric of the show is torn and any last hope we may have had as viewers that Battlestar Galactica is a simple, good versus evil survival saga is abolished for good.