Let me start by saying, I'm not an athlete, nor am I an expert in physical activity or health and well-being. I'm not here to tell you what you should do or that I'm doing things properly. I have no idea about the sporting science behind all this, I'm just someone who runs a lot and feels fit and healthy as a result. I've been asked many, many times, "why do you run?" So this is simply my attempt to answer that question.

The question is sometimes phrased like this, "Where do you find the time to do all this stuff and run so much?" And usually asked when I talk to people about my many hobbies. There's no real answer to this and no one's really waiting for a reply in any case. Their usual justification for not having the time is something along the lines of, "well, you don't have kids-" or something to that effect. I have no response to that, it's true, I don't have kids. Then again, some of the people I see doing laps of Centennial Park with me don't even have legs! I'd say that would be a better excuse to not exercise, right? Yet they're pushing themselves up a hill on a wheelchair.

The reality is, I have the same 24 hours in a day as everyone else. The only difference is the choices I make. So why do I run around Centennial Park for approximately 200km every month? The retrospective answer is simple; it (ironically) helps me do more with my time. It expands my creativity, improves my health and has helped my career.

This wasn't the catalyst though. No, I didn't think about it like that when I started and I can't tell people it will do the same for them. The real reason to get started running was all gut, literally. I returned from Japan at the end of 2011 after a much deserved holiday. I had a great time but I knew I'd been having a bit too much of a good time. Back home, I felt uncomfortable in my own skin. It's a bad feeling, you can't shower it off. I'd never been in great shape to be honest, but I'd never felt unhealthy before. I knew something needed to be done.

I have a small stature and don't put on much weight however there is a misconception about that, "where do you put it all." Is something I've heard many times after a big meal. Well, the same place as everyone else. My frame may not expand but my stomach still does and that is the only place that matters when you are over-eating. When you are short and bald, you better at least keep slim, it's the only part of that particular triumvirate you can really control.

My girlfriend at the time (who is a fitness fanatic) and I signed up for Warrior Dash; a 5km trawl through mud and shit via obstacles, swamp and fire. Great. I had no idea what it meant to run 5km (it may as well have been a marathon) but I knew I needed to get in shape if I was going to finish. I set myself a goal to run it completely, none of this stopping and walking business to catch my breath. So the next day I went out, ran from my front door to centennial park to go for a run but that pretty much did it, I was stuffed before I entered the park, a whole 300 metres probably.

I went home huffing and puffing. Things were bad but the important part was to not decide that it simply wasn't for me. The next day, I went out and did the same thing again and the day after and the day after. Until 300 metres turned into 500 meters and 500 metres became 1 kilometre and 1 kilometre became a full lap of the park (4km). Never stopping to catch a breath.

By the time Warrior Dash came around, I was running 10km straight around Centennial Park quite often and found the event quite easy in the end. Running gave me energy and doing laps of Centennial Park got me noticed by a running coach (Dani from Pulse Performance) who gave me some lessons for a few months to improve my technique and importantly, taught me to focus on breathing. Breathing is the thing that makes you look stupid in photos (see below) but it's also the thing that led me to sprint 5km at a pace of 3:30 per kilometre at the end of the two month running plan Dani had put me on.

Running is now part of my schedule, a routine that ensures I spend at least an hour a day clearing my mind, breathing and thinking. I've solved many a problem while running laps of Centennial Park. Problems which can have their solutions implemented in front a computer but cannot be thought of in front of one.

After around 2 years of active running, there was something bothering me, I couldn't shrink my waist line. I felt a lot better in general but I knew I was kidding myself if I thought all that running was enough. So, after years of being told by my ex-girlfriend that diet is more important than exercise, I finally gave it a go. No more sugar. Full-stop. Let me clarify, no more refined, white, sweet, whatever you want to call it, sugar. I haven't touched coke, cake or cough-lollies (my favourite) in over a year. I still eat carbohydrates but I've toned down on dairy and increased my vegetable intake. I can't stress the importance of my next point enough, I have a diet, I'm NOT on a diet. There is a difference, a big difference.

I enjoy what and how I eat. It's not a sacrifice, I don't have cravings, I am 100% enjoying what I put in my mouth and don't crave what I'm not. I don't feel like I'm missing out. I still eat pizza and burgers and other not so healthy things that I enjoy but what I don't do is kid myself. I don't use phrases like, "it's okay because it's Friday." I know what I'm putting in my mouth and I savour each bite. If you need to force yourself or if your craving for cake is so strong that you can't resist a piece when the office gathers around for monthly birthdays, I can't help you. You have to enjoy your diet or you'll be forever fighting yourself.

Apart from the new diet, I also added some core work to my running routine and for the first time ever, quite quickly, I noticed a difference physically. My running has also improved as a result. I guess I shouldn't be surprised.

Earlier this year, the company I work for entered a team in City2Surf to raise money for charity. I hadn't run in an event since Warrior Dash and generally don't like the idea. It's not why I run and I'm not big on the social aspect of these things (see the colour run for how not to get fit). However, being an active runner and seeing it was for a good cause, I couldn't really refuse to represent. Here's me heading for the finish line: 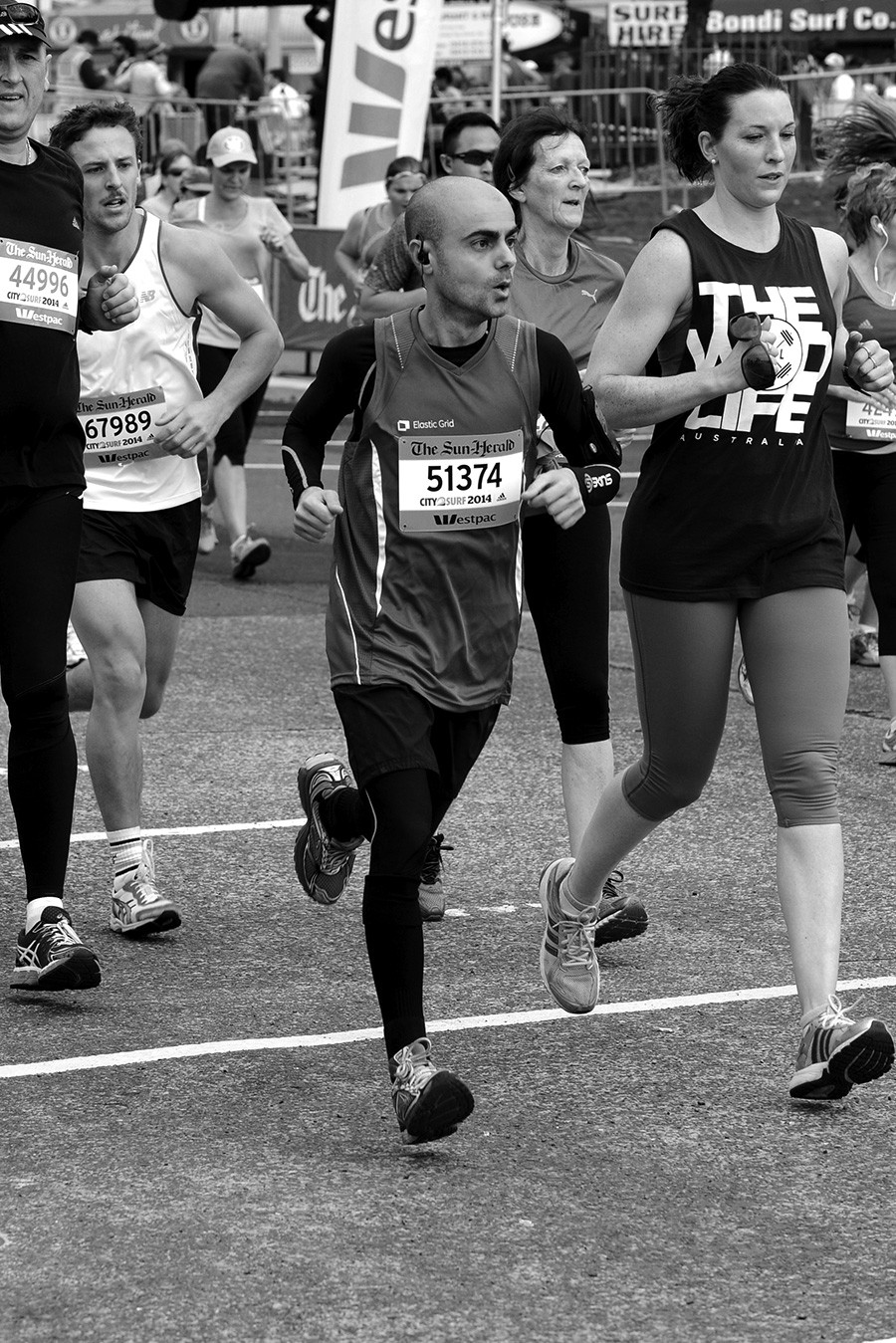 I completed the 14km run from William Street to Bondi Beach in 1:00:36 (kind of annoyed I could shave those 36 seconds off due to the large crowds). In all seriousness, I was really surprised at my time as I've never really focused on that type of thing and it was a lot faster than I'd been running at that time.

Anyway, where am I going with this, why do I run? Well, it's not to be an athlete (not by any stretch) and it's not to win a race or impress anybody. It won't, I would've failed if that was the purpose, there are plenty more accomplished runners out there and people much fitter and healthier than me.

No, I run so that I can look in the mirror and say honestly, that at 31 years old, I am in better shape than I ever have been in my life. Running has helped my design work improve, has helped me start creative projects outside of work and feel comfortable with myself. To be honest, my confidence and courage have both been strengthened in the past few years.

So, it's not too late and you're not too busy. Just make a choice; run, or skip, or ride, or surf or whatever you enjoy. Or don't if that is your choice, just don't make excuses. Find your motivation but do it because you want to. If it's a chore, it'll forever remain a new year's resolution.