With the final installment of the third Star Wars trilogy coming to theaters this December, coupled with that fact that I reviewed The Force Awakens, I felt the dropping of the first trailer for The Rise of Skywalker was a good time to finally finish my review of The Last Jedi.

In retrospect, the fact that I didn't review The Last Jedi when it came out speaks volumes. I didn't find The Force Awakens all that inspiring and was hoping for more from The Last Jedi, being that I was quite excited that Rian Johnson was helming the chapter rather than JJ Abrams.

While I enjoyed it overall, more-so than the The Force Awakens, it ultimately felt as if Rian Johnson set out to make a stand-alone film about his beloved Luke Skywalker with the caveat that he some how connect it (or wedge it) into an already developing greater narrative about new characters and situations. This was always going to lead to some questionable character and narrative choices which I'll try to unpack.

As The Last Jedi unfolds, it quickly becomes clear that Rian Johnson had no intention of answering all the questions raised in the previous episode. The entire premise of The Force Awakens is that finding Luke will turn the tide on The First Order's rise to power, yet Luke's reaction after being given Anakin's lightsaber (throwing it over his shoulder dismissively) by Rey (a moment carrying so much weight at the end of The Force Awakens) pretty much sets the tone for the rest.

What about Rey's parents? It doesn't matter, "stop asking" the movie demands. The focus on her ancestry and the fact that it was ever raised as a question has added so much unnecessary conversation for something that clearly doesn't matter. Showing her parents and just giving her a surname in The Force Awakens could have let the orphan story be, without adding all the speculation. In the end, regardless of the direction they take it, it will either mean nothing, or become obvious. Her journey has been stunted by the films having to resolve a real world question about audience speculation rather than a narrative one about her character.

Rey's arc is probably the clearest indication that the three movies were never fully thought out as a unit. Her story has become less about finding herself but rather finding her parents, purely because of the way it was set up. The Last Jedi shouldn't have had to address it, but rather demonstrate her path to becoming a Jedi, having left Jakku and her past behind her already in The Force Awakens.

The other big mystery which surrounded The Force Awakens was about Snoke's origin and his importance in the greater Star Wars tapestry. A million theories were literally chopped down in one fell lightsaber swoop. He was nothing more than a plot device for the turning of Kylo to the dark side in The Force Awakens and a communication signal between Rey and Kylo in The Last Jedi.

Not that I was that enamoured with the new characters in the first place but there's nothing in The Last Jedi which improves them.

Maz Kanata, little more than a plot device in The Force Awakens, is presented with some reverence, however in The Last Jedi, she's yet again a plot device, though this time literally becomes a cartoon in a arcade game cut scene.

The Finn/Rose thread of the movie offers little, to their character building or the overall plot. It gives them something to do, that ultimate doesn't matter to the story, a waste of time for both their characters and the audience. Rose's statement at the end of the film regarding "saving what we love" is ridiculous if well-intentioned. A sentiment that needed a much better execution rather than subverting a sacrifice scene considering the dire situation they were in, not to mention the physics of the whole thing. It was just weird in context, seeing as she likely would've of just killed both of them (and the whole whole Resistance) pulling the stunt she did.

Finn himself has the exact same arc in The Last Jedi as he does in The Force Awakens. A coward who must find courage, only interested in Rey rather than the cause.

However, perhaps most confusing is the re-hash of Kylo Ren's, will he won't he, be redeemed arc from The Force Awakens. Again, this lack of definition is confusing. He killed his father. That's it. Let it be.

In the continuum of Star Wars, the father and son relationship has been used as a definitive line between the side of good and evil. In Return of The Jedi, Luke chooses to save his father, avoiding a fight and showing the power of good in the most operatic of scenes.

When Kylo kills Han Solo at the end of The Force Awakens, Ben Solo should have died along with him. In The Last Jedi we should have never seen his face but a scarred helmet. That chapter in his story was over and the next chapter should have focused on his ruthless pursuit of power because he's becomie fully Sith. Demonstrated to us by his overthrowing of Snoke to gain more power for the sake of it, not to save Rey.

This was an unnecessary tangent for both characters story's in a forced way to give them some sort of emotional connection which simply hadn't been earned. We have no reason to believe that Rey feels she could, or should, or would want to save Kylo from the dark side. She watched him murder a mentor and nearly kill her friend Finn. We are thus forced to believe a few Force(fed) Skype calls could change that.

Speaking of the force. This was a just a little bit too silly, no?

Not just visually, but because it wasn't earned. Setups matter in story telling, yet aside from a throw away comment in the original trilogy (which may or may not even been about Leia), we have no reference point to accept that Leia had any level of proficiency in the force. Yet, all of a sudden, we see her use it to survive being blasted into space? We just needed to see her lift an inadament object with it or a reference to her focusing on training again. Something, anything.

Aside from that, Carrie Fischer's portrayal was fine and seeing a brief reunion with Mark Hamill was great.

Luke Skywalker's arc in the movie has been the most contentious however it was really the only part of the film I thought was handled well and perhaps the story Rian Johnson was most invested in. It felt like it was the movie he pitched and simply had to do something with all the existing characters and story details he inherited.

In fact, the dynamic between Luke and Rey was fun, fruitful and pushed the narrative forward. Her search for knowledge about the force pushed her arc forward and the banter with Luke was reminiscent of his own training with Yoda. Seeing Yoda and Luke together again in a great scene was also a joy.

Telling the story of an old and weary Luke who'd lost faith was really the best way to go in order to give him an arc at all. While this may change how we viewed him in our collective consciousness as the ever hopeful young Jedi from the original saga, it does give him more depth and his final scene was amazing.

Foiling Kylo and The First Order in the most Jedi of ways, Luke saves the day at the last minute by demonstrating his guile as well as the restoration of his faith. The elegance of this writing was missing through out the rest of the film unfortunately. 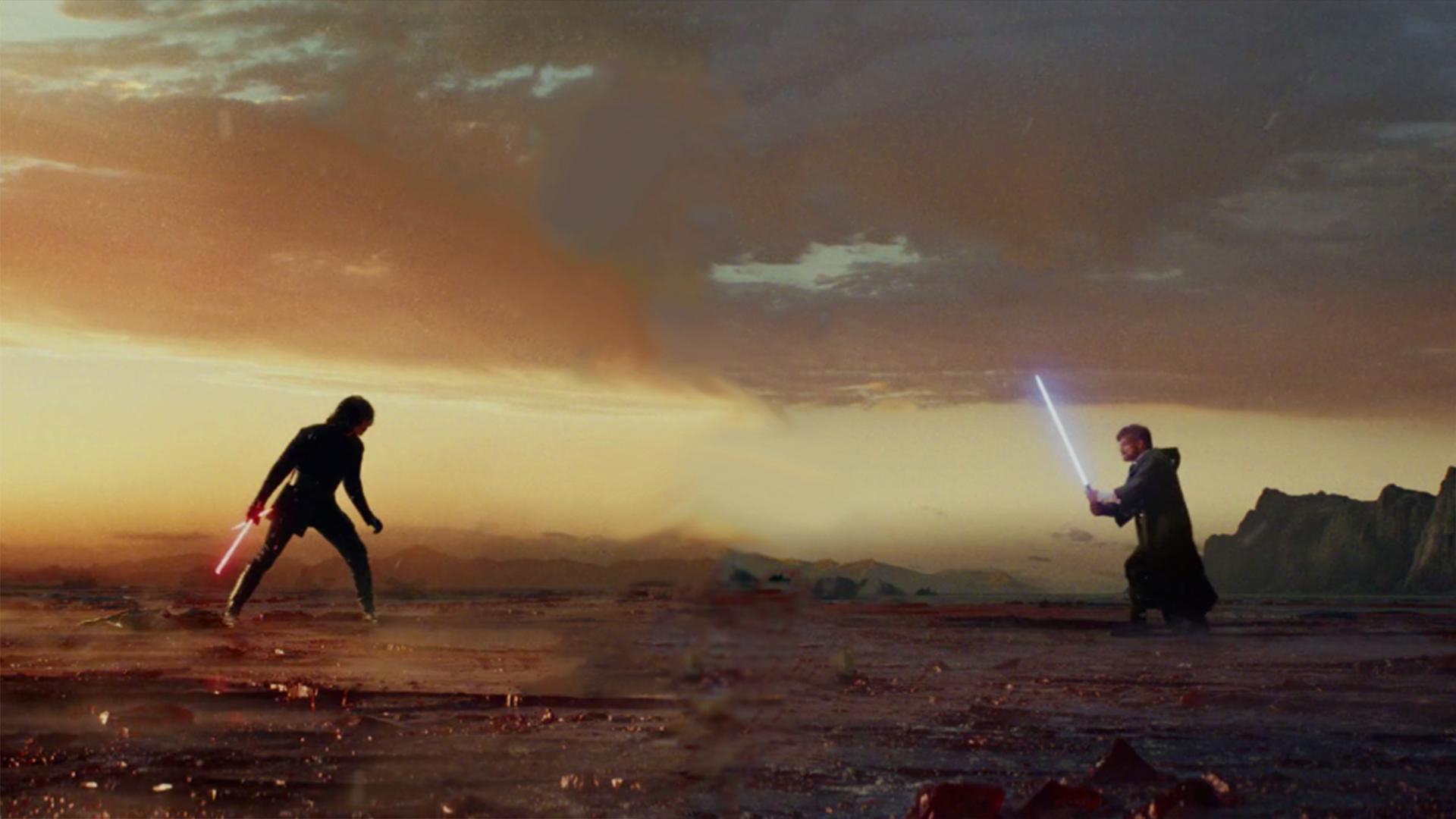 What about the film?

Despite tearing apart most of the characterisation, overall, I actually preferred The Last Jedi as a movie to The Force Awakens. It's main thread regarding The Resistance fleet being chased by The First Order was an interesting parallel to The Empire Strikes Back. It actually reminded me of the episode "33" from Battlestar Galactica, in which the fleet has 33 minutes to prepare for their next jump before the Cylons find them again.

While this premise had a lot going for it, it didn't really play out how I'd hoped. Rather than throwing all this side-stories at us it would have been great to just see the team work together to get themselves out of the situation. The splintering of The Resistance crew was kind of a let down and added the messy and pointless casino planet thread to an already complicated plot. It also leaves us will a cool yet strange choice of giving Laura Dern's Holdo the heroic moment (when there was no need to really). Yet again unearned as we weren't that invested in her character.

So, while there are some amazing concepts in The Last Jedi, which showcase Rian as an exceptional filmmaker, The Last Jedi suffers from many of the failings of modern blockbuster movies such as poor cohesion, non-narrative relevant action set-pieces and heavy exposition in dialogue. In part due to being burdened with a heap of mystery box baggage from The Force Awakens.

Though I did feel The Last Jedi was an improvement on The Force Awakens, it does ultimately feel like a side-step rather than a middle section of a trilogy. This has been validated now that the trailer dropped for Episode IX. It looks like JJ Abrams is making a sequel to The Force Awakens and just as Rian Johnson dismissed a lot of the story threads he was handed, we may see them be re-centred in The Rise of Skywalker, with those set up by Rian now dismissed.

Palpatine? Really? Well, this will be nothing if not interesting and perhaps a result of the loss of Snoke?

Let's hope for the best.