Mass-produced media formats may be dead or dying but 'the cloud' hasn't yet killed our want of quality objects in the space entirely. The question is, why not?

A few weeks ago I hosted a stall for my indie-mag Caffeine & Concrete at the MCA Zine Fair; a fantastic, annual event for independent artists to show off their wares.

As an attendee or stall holder for the past 5 years I've seen the quality of the zines, indie-mags and self-published books get better and better. Along with that, the event itself has been improved each year by the organisers. This year being no exception, and you can see below just how full Foundation Hall was with zinesters and enthusiasts at any given moment during the day.

One thing which the fair gets me thinking about is why—in a world of digital convenience—are people still seeking objects of printed matter and generally showing their support for this type of work?

I've concluded that there is more value in objects that deliver content traditionally than the content itself, and that the tangibility of physical collections is something people will always crave, especially as our digital media devices have such temporary value.

Take a smartphone; it might be the most important possession we own, but not for what it is as an object. A smartphone only holds value as a utility that interfaces us with data; a personal window into the internet. Much like early digital music players were replaced, we will likely find that the smartphone itself is eventually replaced by another construct because it doesn't hold value outside its utility. For example, if the battery dies, the sleek design and smooth glass don't offer much in and of themselves. Further to that, we will replace our smartphones without so much as a second thought when a new model is released.

However, a book, a watch or a vinyl record player, while limited in function, as objects they offer us much more value than that single thing they interface us with. They can be storied, timeless, focused, decorative, unique. Perhaps, it is actually their limits which make them more meaningful?

Sure, not every mass produced paperback or cassette tape Walkman has these qualities, but there remains an appetite for limited media in forms that don't require an internet connection. So, while physical media doesn't make something more legitimate, there is something extra special about a piece of work when it is manifest into the material world rather than presented on a screen.

I have noticed this in regards to my concrete poetry books, Green Man Taught Me To Walk and Red Man Stopped Me In My Tracks. While mainly an accompaniment for the Caffeine & Concrete magazine proper, these collected books—to my surprise—have continued to prove very popular at the fair; always selling out.

Each year, even before knowing what they are; their size, their weight, their textured covers and vibrant colours draw people in. 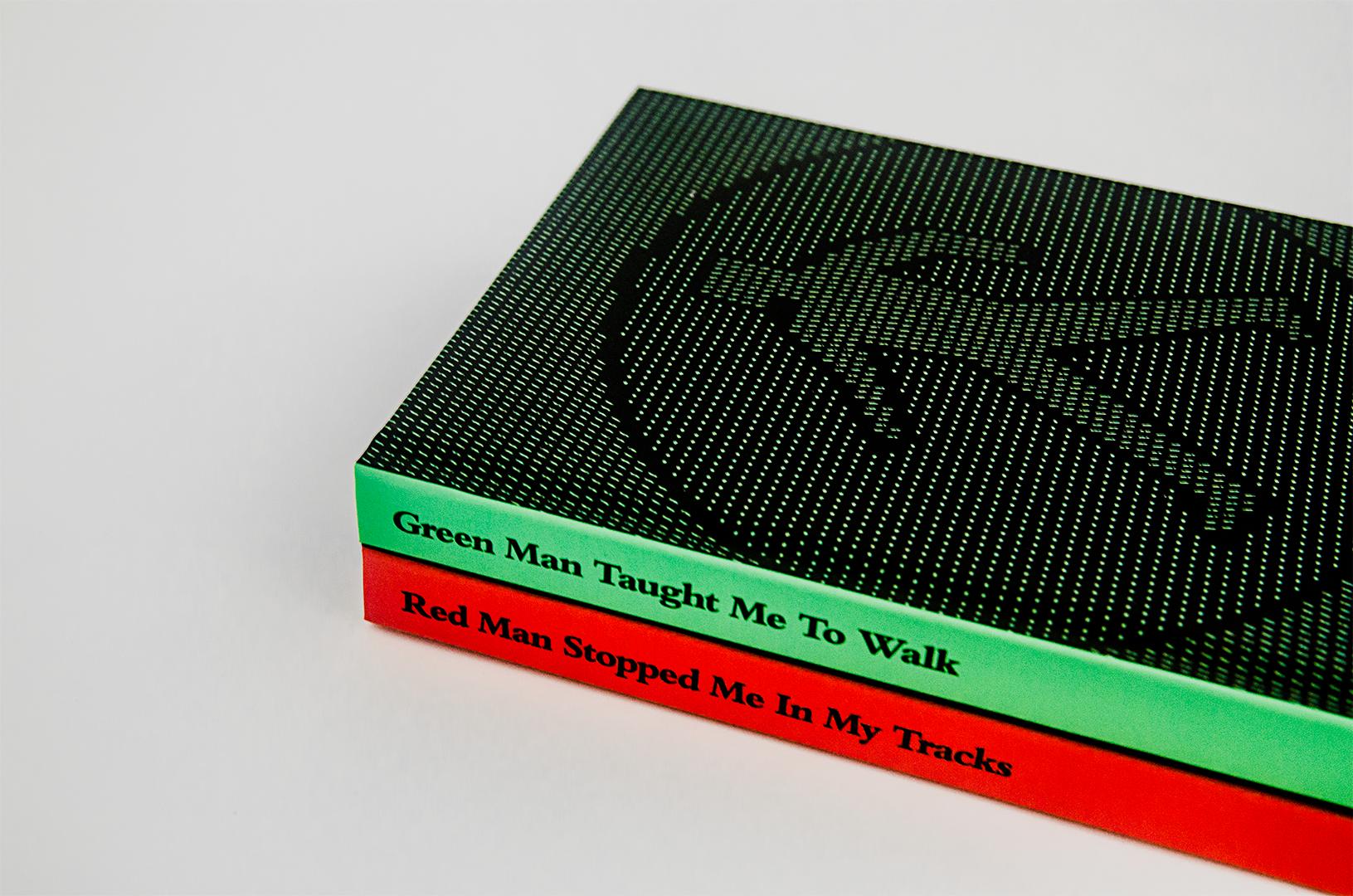 Hesitant to open them, people will instead run their hands along the patterned covers which give a sensation of being embossed, perhaps due to the heavy ink which makes the covers feel leather like. It's a curious interaction, and I'm often having to remind people that they are welcome to—and should—look inside before they decide to buy them.

Chloe Ferres, uber-creative and talented bookmaker noted in her interview with Caffeine & Concrete about books as objects;

"I love the book as an object first and foremost before content."

And perhaps she's not alone. So while I'd like to think my poetry seals the deal, I believe it's the book's overall uniqueness (not just my type-imagery) which makes them desirable to passers-by. 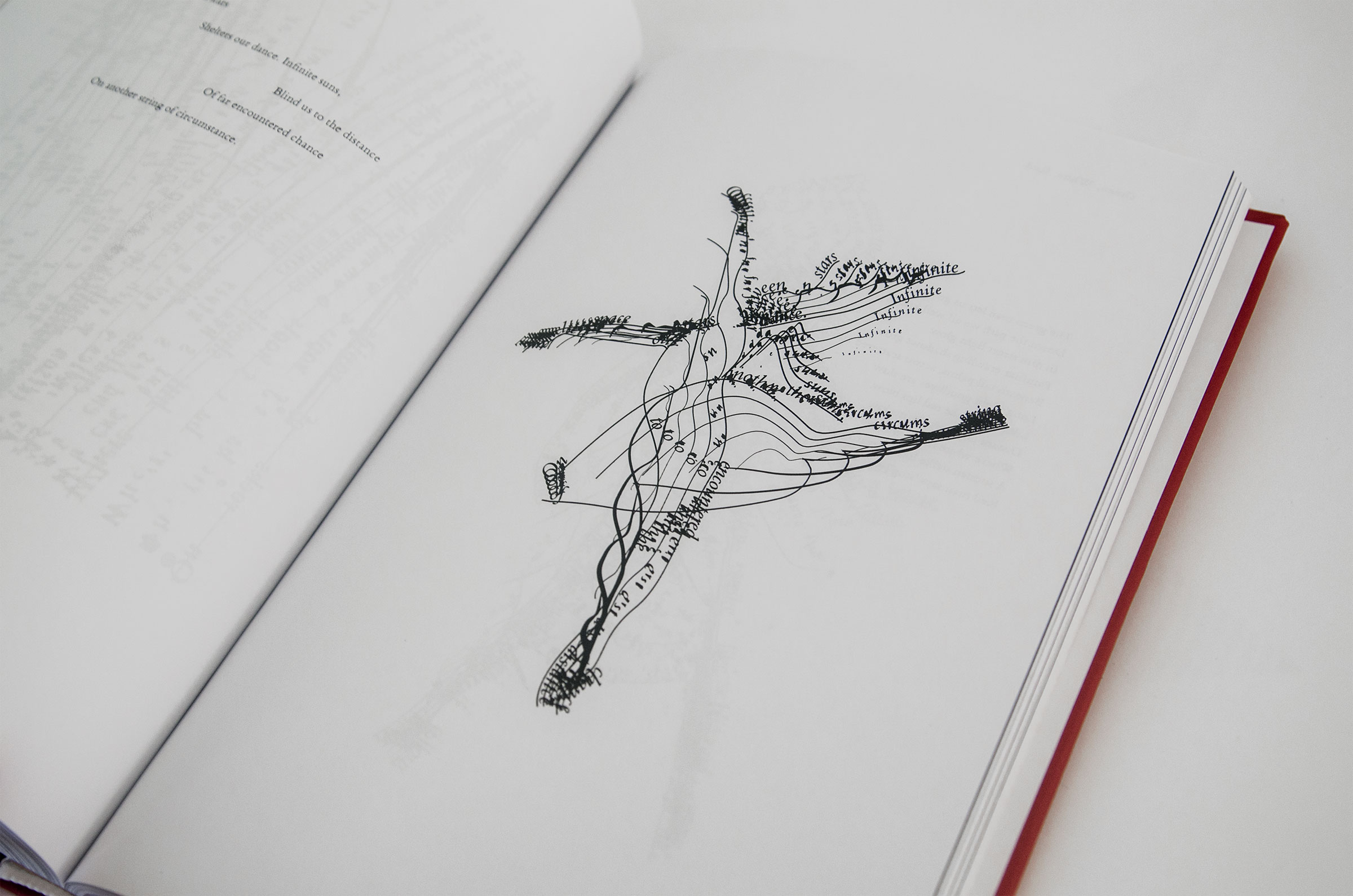 Of course I'm humbled that anyone would interact with something of my making in such a way. It's strange to have people try and decide which one to buy, or comment that they will look great on their coffee table.

It's worth noting too, that while all the poems are available to view on Instagram, Facebook and Pinterest, there seems to be something people are seeing as more significant in the format the book presents them in. Further to that, while the books are readily available via Blurb, they aren't mass produced, and picking one up at the zine fair perhaps gives them an extra bit of story.

Bec Pino of Fleur and Felix relates a similar concept to fashion in another Caffeine & Concrete interview;﻿

"Because of the Fast Fashion movement there is such a high turnover of products. People, I feel are looking for quality over quantity now."

Fleur and Felix create short-run, hand made fashion accessories and apparel and carved out a niche following of customers who wanted to wear something they knew was not just limited but also crafted.

Chloe Ferres believes that the immortality of physical objects is perhaps the result of us craving a more human touch in our lives;

"In living our lives on a screen we’ve lost innate human connections."

To that end, with most of our libraries becoming digital services we subscribe to, the convenience alone hasn't made us stop collecting. We are just more conscious now between the differences between a vinyl record and a playlist on Spotify. One has weight, history, feeling, a sense of quality. The other, a moment in time, an interface to content but nothing more. They each have value, but one has, or can have value beyond the content.

So, despite all the logic and convenience of reading on our Kindle or the fact that our smartphone can tell us the time, we still sense the weight and feel value in objects that serve a purpose beyond their single function; such as a book or swiss watch. A quality that can't be attained in the digital landscape or by lesser objects which are mass produced due to their inherit obsolescence.

Inspiring creators share their stories over coffee, wrapped up in concrete poetry.