Spowtr — Trusting others; or, that time I had eye surgery by LorenzoPrinci
↑

Trusting others; or, that time I had eye surgery

A response to
Amalgam Fillings and Vibrating Needles by Whaat

Having never been one to dread the dentist, I can relate to the realisation that we do live in the best era in humans history in terms of medical care. That isn't to say there aren't socio-political concerns with how medical care is organised but in terms of our ability to heal and be treated, it cannot be compared to what our ancestors had to experience.

If you follow Lindsey Fitzharris on Twitter (@DrLindseyFitz) you'll quickly get a sense of just how, let's say, rudimentary, medical procedures were in days gone by. For example, she pointed out on her appearance on The Joe Rogan Experience, that at one point in time the best performers of amputation were judged by how much blood had stained their aprons.

We've certainly come a long way, and Thiago's story about his trip to the dentist had me reflecting on my own recent experience with eye-surgery. Considered bread-and-butter surgery as far as eye surgery is concerned, having it gave me a new appreciate for the state of medical care and alleviated a lot of my fears in regards to, "going under the knife".

I've never being one to run to the doctor or take pharmaceutical medicine unless absolutely necessary, and other than the odd bump, scrape, sprain, bruise and flu; I have been very fortune health-wise for most of my life. So, when I was diagnosed with a Pterygium growing on my left eye I figured it was finally my turn to go through some sort of surgery and ironically, on a part of my body which I am particularly sensitive about. I'll take a trip to the dentist any day over having someone poke around near my eye.

I was heading into the unknown, never being through a surgical procedure before and stressed about the risks involved in regards to it being on my eye.

So, what is a Pterygium?

A Pterygium (the P is silent) is a growth on the eye ball, which while not very serious can grow over the iris and pupil and ultimate affect vision (as well as being nasty looking). It's cause isn't exactly clear but generally due to sunlight and wind. As surfers are prone to get it due to their exposure to the elements, it is commonly referred to as "Surfer's Eye".

This is an example of a Pterygium at a similar state of growth which mine was when I decided to proceed with the surgery. You can see how it causes redness, due to creating a barrier between your tears and the surface of the eye which thus, remains dry. A flare up of this redness was what made me go and get it checked out in the first place. 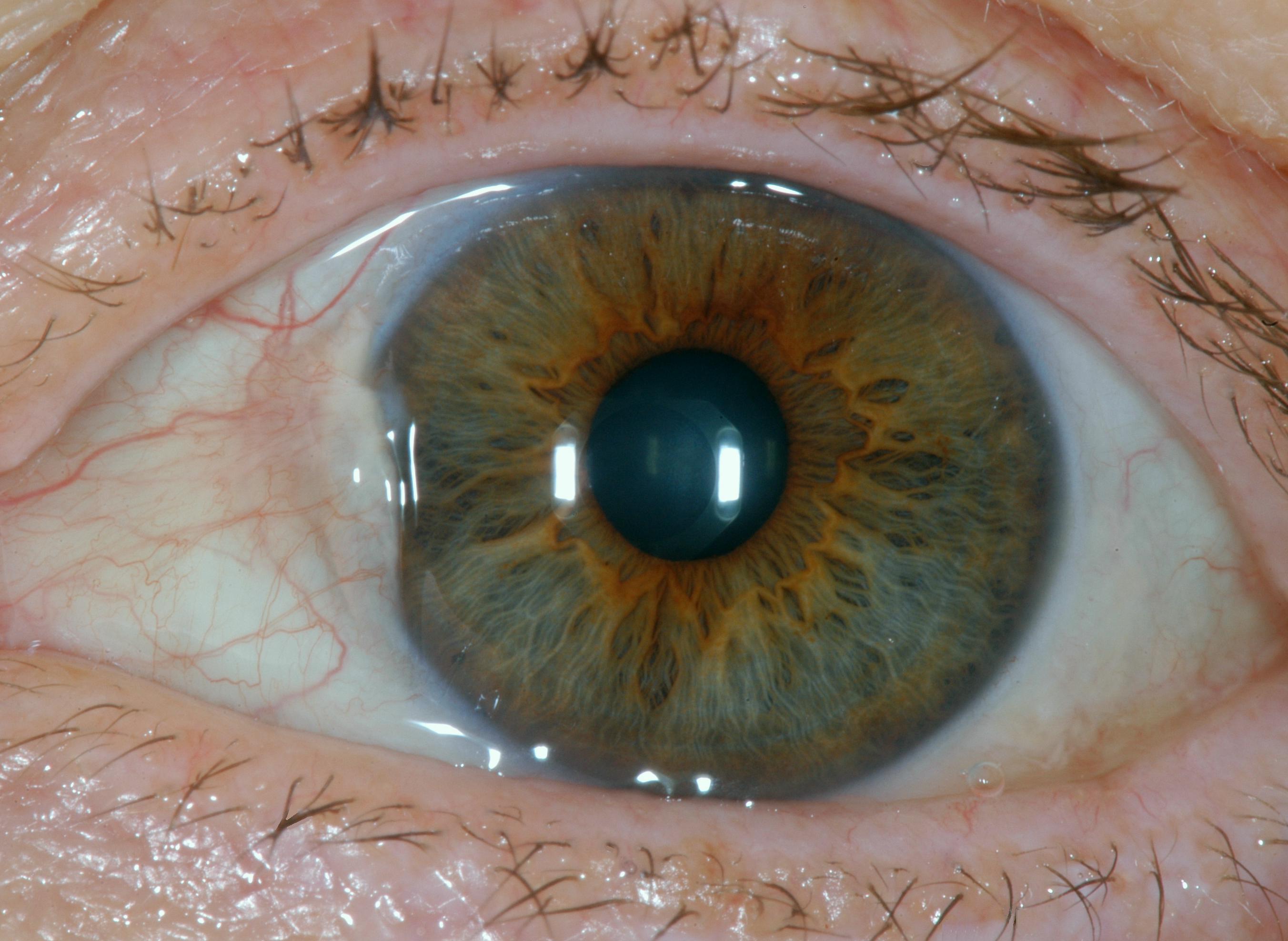 I had noticed the grown before this but because it didn't irritate me, I didn't really worry about it. It was no doubt caused by my runs around centennial park which expose me to sunlight (as I don't wear glasses when I run) but also heavy winds which kick around a lot of dust and dirt.

I did in fact have a few experiences where things have flew into my eye, notably a small foreign object which got caught in my left eye and had to be removed quite painstakingly by a very patient GP at my local medical centre with a small needle type instrument, while I yelled expletive. Suffice to say it wasn't much fun, but as it turned out, it wasn't to be the last time I needed my left eye treated.

Well a Pterygium isn't treated per se; they need to be removed and to be honest, I only understand the procedure vaguely. That is because, as my brilliant specialist was explaining the risks of not dealing with it and how it would need to be "scrapped off and replaced with a graft from--", I was starting to imagine the surgery like this...

...and cut her off to avoid painting further horror movie inspired pictures in my head. I decided to put my trust and faith in her. Trusting that she was being sincere about her concerns about it growing and trusting she would do an excellent job removing it.

While I understand that it's in the interests of specialists for me to opt-in and pay for expensive procedures, I still have to believe that doctors are here to heal and do good. Having both my GP and the specialists tell me the same thing, I accepted that it was better to deal with it, even if it was going to be a cosmetic procedure at the time, more than a necessity.

In the weeks leading up to the surgery, having no previous experience I kept my mind off of it by focusing on my career. However I was feeling an underlying stress; worried something could go wrong. Without really understanding the procedure, many scary thoughts run through my mind about being put under. What if I wake up and something went wrong? Could I lose an eye?! And so on...

I didn't sleep much the night before and was stressed right up until the time I arrived at the surgery centre. However, from that moment I felt better and the staff were truly amazing. Thanks to the friendly administrators, nurses, anaesthetists, and of course the surgeon, it couldn't have been further from a Dario Argento horror scene.

Before I knew it, it was over and I was on my way back home. Here's me about 30mins after the procedure, still riding a bit of a high from the drugs; 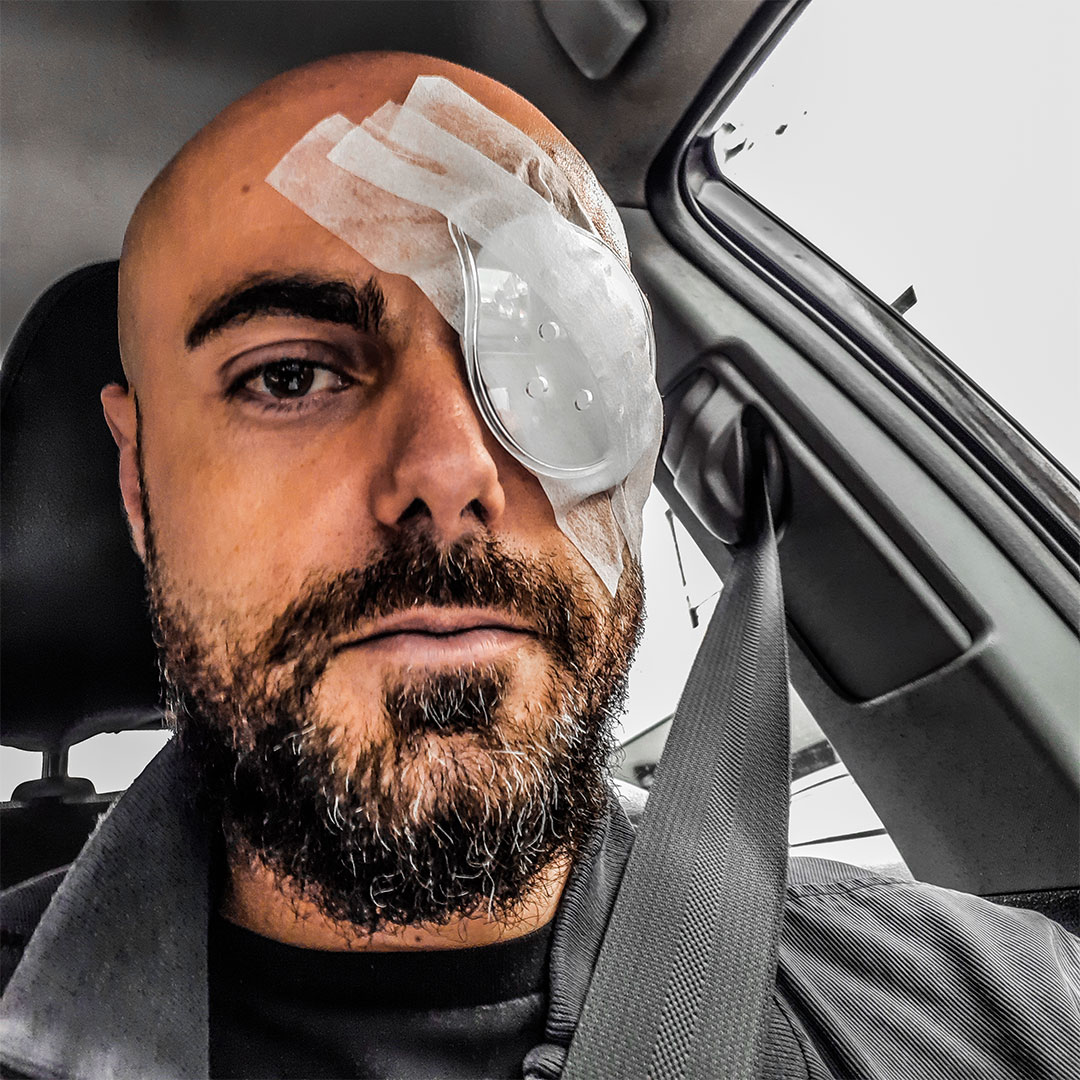 It's quite remarkable, that after having a procedure on my eye which involved cutting and grafting I was back working the next week (albeit from home). Aside from some irritation managed by drops for a week and this bruising and inflammation looking quite bad, the whole process ended up being quite painless. 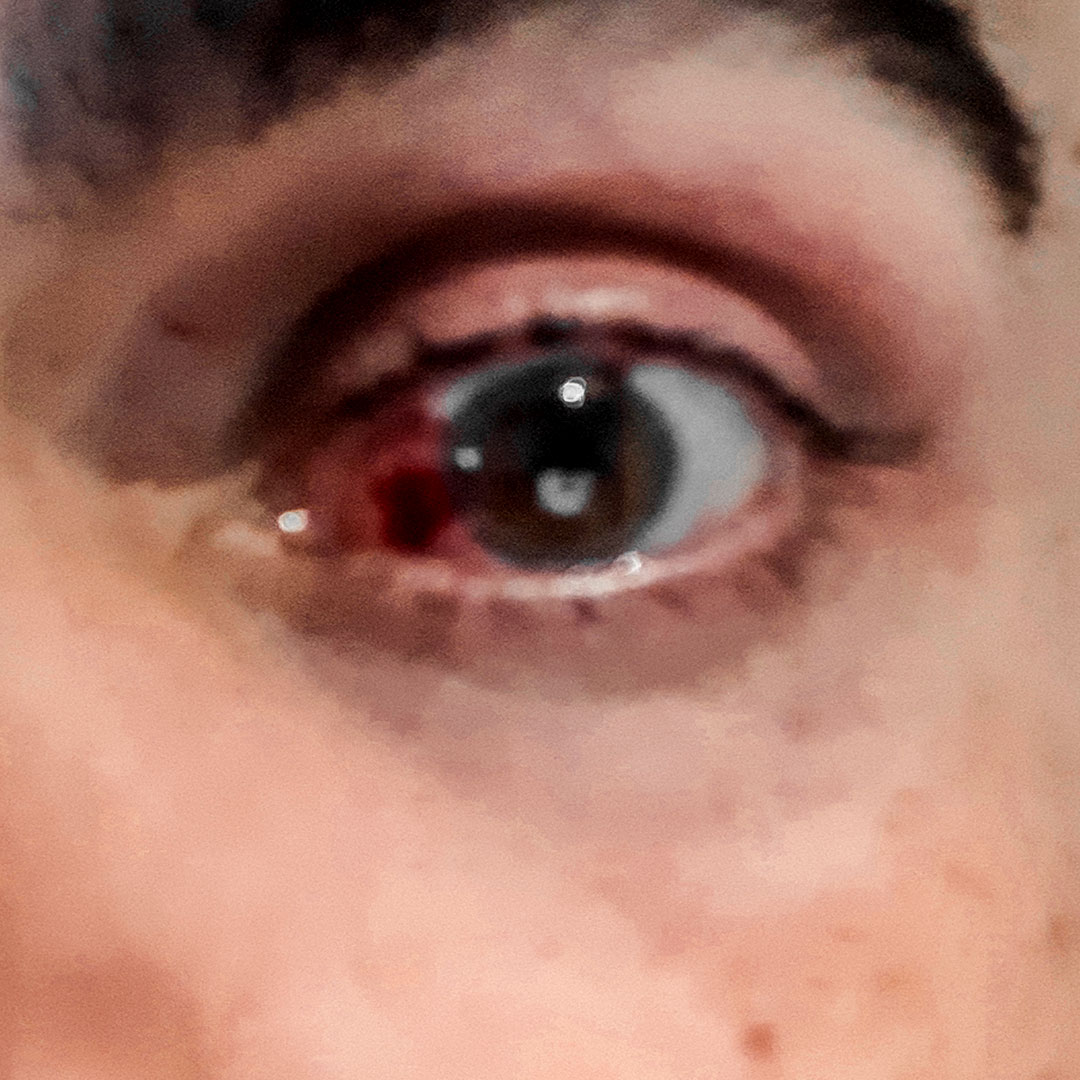 Once it healed, and I could really look at the perfect work which was done, I was awed. It is quite miraculous that an operation can be performed on such a delicate part of the body, so precisely and so quickly. While this is perhaps the simplest surgery in regards to an eye, it's still quite remarkable.

Yes, unfortunately a Pterygium can grow back, and I'm not sure I want to go through the surgery again, nor does my wallet, so I've had to make some changes around my running. Trying to be a bit more serious about taking care of my eyes now, I've found these goggles after some serious googling; 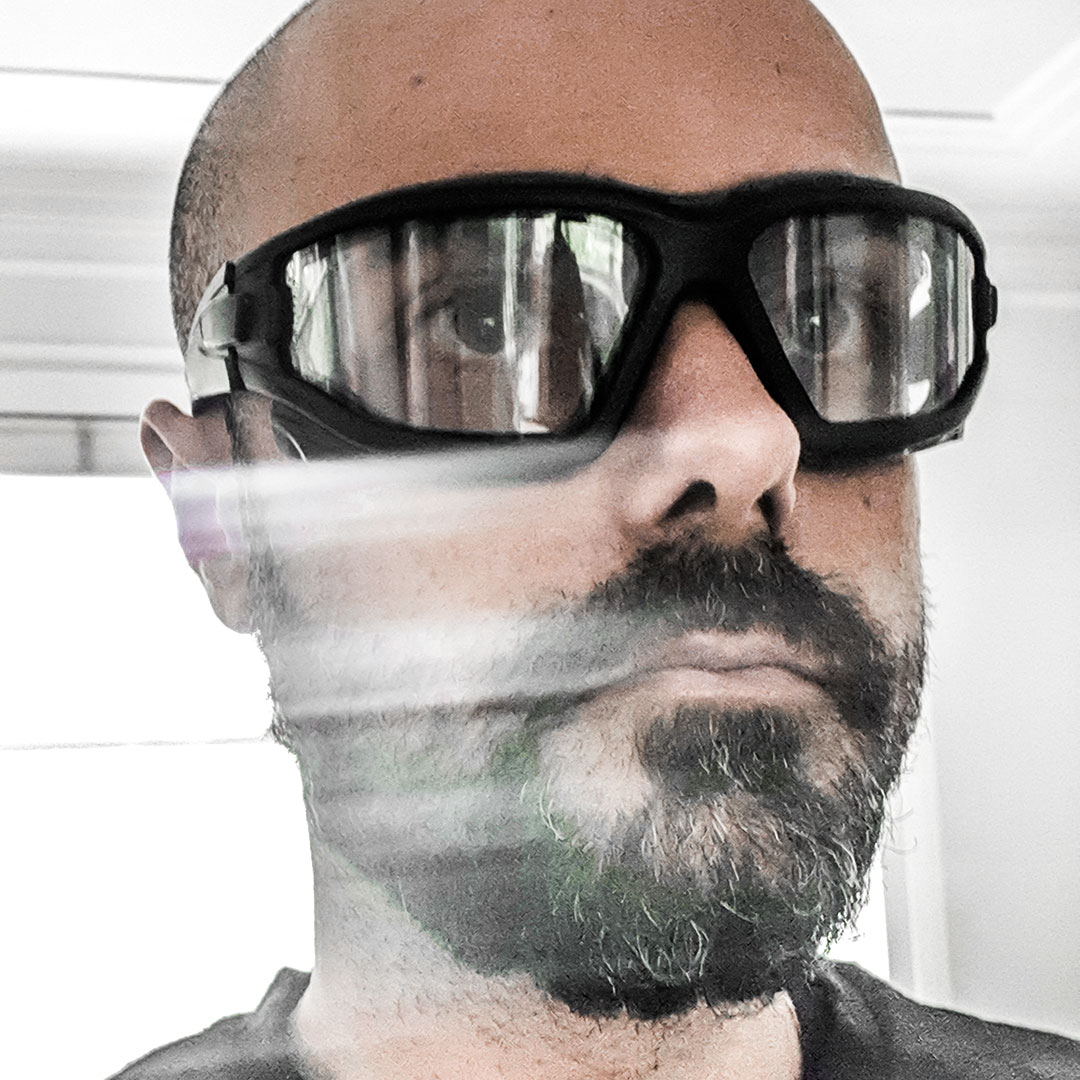 While they won't win me any fashion awards, they are comfortable, light-weight and protect me from UV rays, wind and anything that's flying around the running track. This new, function over form mentality is definitely a sign I'm getting older and wiser.

Despite the miracles of modern medicine, the surgery was a blessing in that I've learnt two things, there are amazing, talented and caring people I can trust to take care of me when I'm out cold, and that I need to take better care of my eyes so that they don't have to again.

On a related note, I'll be wearing these bad boys while I run this year's City2Surf in August to raise money for Guide Dogs NSW/ACT, which seemed apt.