I cannot believe it! Star Trek has been out for a month now and I can't find one bad review anywhere. Star Trek! One of the most loved and passionately followed Science Fiction television and film universes ever created gets a re-boot and I haven't heard one complaint from hardcore trekkers! Remember what kind of reviews Star Wars Episode I received?

I'm convinced there is a conspiracy, maybe I'll be contacted by Paramount goons as soon as I publish this to my blog and be forced to withdraw it? What's worse, the only negative reviews I've seen have been skit stereotype comedy takes, which I'm convinced are actually part of the marketing campaign.

Well, I can't let this continue... I'll boldly go where no reviewer has gone before...

Firstly, let me state that I'm a bit of a traditionalist and I think the whole re-boot idea is fundamentally flawed. If a franchise has become tired and stale and everyone hates it, why use it? Just do something else (truly new) in space... but clearly the Star Trek name has enough pulling power to draw an audience so why then I ask, create a film that is anything but Star Trek?

Another angle of praise for this film was that the casting was of nail on the head calibre. For the most part I will agree however the characters where not nailed. Bones (played by Karl Urban) was the only character who had that Robert De Niro playing a young Vito Corleone feel to it. Simon Pegg's Scotty was a highlight too but a little too comical. I'm going to go as far as saying that even old Spock felt like a parody of Spock, or a stereotype of Spock rather than the actual character being played, as if he was only in the film to add some credence to the whole thing. The whole film tries hard to give people who don't know anything about Star Trek what they want.

I was promised that the film would contain enough throw backs and canon links to the Star Trek universe as we knew it to keep die hard fans happy. Well firstly, throw backs should be about the setting, a way of grounding the story in the Star Trek universe. However all the throw backs felt more like references to Star Trek from the director, JJ. Abrams (who wastes no time in interviews to tell us how he was never a fan of the show) to further take the piss, telling the new audience, look how stupid is Star Trek was... this movie is so much cooler.

Almost all references to the greater Star Trek universe were always obvious and meaningless; For instance the Orion (slave?) girl seemed to be added in because Eddie Murphy made a joke about it, so your "average" audience can relate. Nothing to do with pleasing the hardcore fan base who are probably scratching their heads as to why they had never been introduced to an Orion female star fleet officer before. Other gems of references such as that to a "Cardassian Sunrise" drink or "Admiral Archer's Beagal" made me cringe. Though I guess their could be a drink called Cardassian Sunrise, why not just order a real Star Trek drink, like Canaar? And shouldn't Archer's beagle be dead by the time this film is set? The only good throw back I found true to Star Trek and actually clever (and funny) was Sulu's fencing. But the Red Shirt killing himself was another obvious, very poor and forced reference (but they had to do it right). The red shirts in the original series were usually a plot device to show what the enemy could do... the red shirt in this film was some hot head who kills himself for no reason.

The absolute worst and most cringe worthy "throwback" was Chekov's over cooked Russian accent with the computer not understanding his V'd W's. Why? you say, every one laughed right, yes they did, even me... But this helps illustrate my point about the flaws of this film. The joke this is giving an homage to is again obvious; Star Trek IV's "nuclear wessels" which Futurama so expertly parodied in Where No Fan Has Gone Before. However it wasn't just funny because Walter Koenig was putting on a funny voice. What made an intelligent audience laugh at the time was Chekov's nativity and the irony of a Russian asking an America police officer where to find America's stash of nuclear weapons during the cold war!

That is Star Trek, not pointing fun at an accent, bordering on racism which Star Trek is fundamentally against.

“Why are you talkin' to me man?” says Kirk, to Bruce Greenwood's Captain Pike. This is the one piece of dialogue that for me totally removes this film from the Star Trek universe, even more than the NOKIA logo in the car when Kirk is very young. People in Star Trek are supposed to be a heightened humanity, like character's in Shakespeare, not like character's from the OC. I was half expecting a cameo from Ashton Kutcher!

This leads me to Uhura, who was the one character I truly hated in this film... she was nothing like the character we had come to know, and I don't see how she would grow into her either. We kept on hearing how good she is in an attempt to strength her character however she just felt like a character from The Fast & The Furious or any other faced paced teenage summer blockbuster (hot girl who is also a genius and falls in love with the geeky guy). 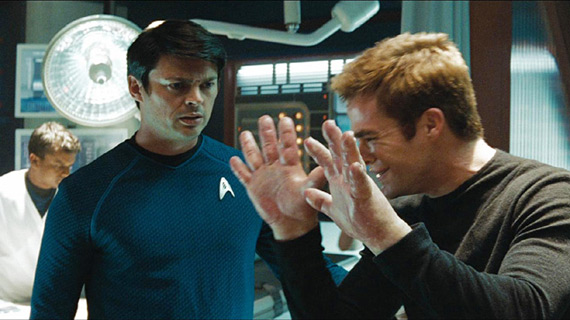 I know what you are thinking... all this just sounds like anal nitpicking... it's still a great film right. Well in that case I will examine some heavier issues, which aren't Star Trek examinations, just film ones; theme for instance. One of Star Trek's strongest draw cards over the years hasn't been special effects, or action scenes but the mirror it places in front of us. Gene Roddenberry showed us a world in the 1960s which made us reflect on the world, putting black women in positions of power, Russians and Americans working together, just to state a few. This questioning of our current world and debating serious psychological and philosophical themes by the stories of a future civilisation always held true throughout all Star Trek television shows and movies since (not always executed well but always well-intentioned).

This new re-boot does nothing in terms of rebellion against the mainstream, in fact it is very, very modern Hollywood.

"Kirk was a great man, but that was another life...” But he is wrong, you can't just kill Kirk's father, he will still become James T. Kirk, Captain of the Enterprise and he doesn't have to do anything apart from act like a Generation Y spoiled lazy kid from Orange County and voila... "here you go son, have the keys to car-- I mean the Enterprise."

Perhaps this isn't the main theme, perhaps revenge is, but Nero's character was so one dimensional that nobody cares for his justifications. We would have needed to see his family die at the start of the film rather than Kirk's in order for this to be viable. He will only be remembered as the guy who destroyed the Star Trek universe by killing the most important person in that universe; Kirk's father. When George Kirk died, the whole universe and canon or Star Trek changed, from Kirk becoming a brat, to Christopher Pike getting older, to Sarek become an accepting and emotional father to Spock. In any case it is Spock and Kirk who have the last laugh in that very enlightened moment when they destroy the helpless Nero and almost chuckle about it, getting their revenge.

I have heard comparisons to Starship Troopers which was the first thing that came to mind after watching it... I'm not even going to go into how many levels of bad that is, don't get me wrong, I loved Starship Troopers but the only comparison between the two should be the 'star' bit. All said however, I do understand that this movie has made heaps and heaps of money which was probably the aim so perhaps eventually we will get an injection into the real Star Trek universe once the mainstream gets sick of this... maybe...

Originally posted 25 May 2009 at www.lorenzoprinci.com